OZ7VEA closed station for this year

After 13 days of activation and 852 QSOs I close the station. It was a pleasure to work all of you here from Bornholm island.

The final score is as follows:


Last update to hrdlog.net was done and all QSOs are in the log.
Eingestellt von Axel, DL7VEA, OZ7VEA um 11:44 Keine Kommentare:

1. Next upload to hrdlog.net will be done tomorrow. The IOTA contest QSOs will be included as well then.

2. Current QSO status including IOTA contest (I participated as phone only):

See below for 2 pictures taken during the contest. 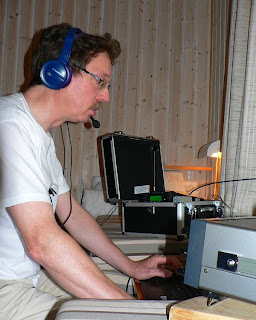 The equipement used during the contest. At the left is a portable box with a FT857 used as an additional receiver. In the middle you see the Lenovo netbook used for looging. At the right hand side is the main TRX - TS570.
Eingestellt von Axel, DL7VEA, OZ7VEA um 18:57 Keine Kommentare:

1. Upload to hrdlog.net done for today.


3. Next status update will be on July, 31st as on July 30th I'll be in the contest. May be I'll give some comments on the contest later tomorrow.
Eingestellt von Axel, DL7VEA, OZ7VEA um 21:59 Keine Kommentare:

Finally managed to upload the last 2 days to hrdlog.net.

So feel free to search for your contact with me.
Eingestellt von Axel, DL7VEA, OZ7VEA um 22:03 Keine Kommentare:

During the last days I tested equipment and software (UCXLOG) for the contest and so far all seems to be ready for the "battle".

1. Upload to hrdlog.net is not possible again. I suppose the server is under heavy load during the evening. Will try to do it during the morning.